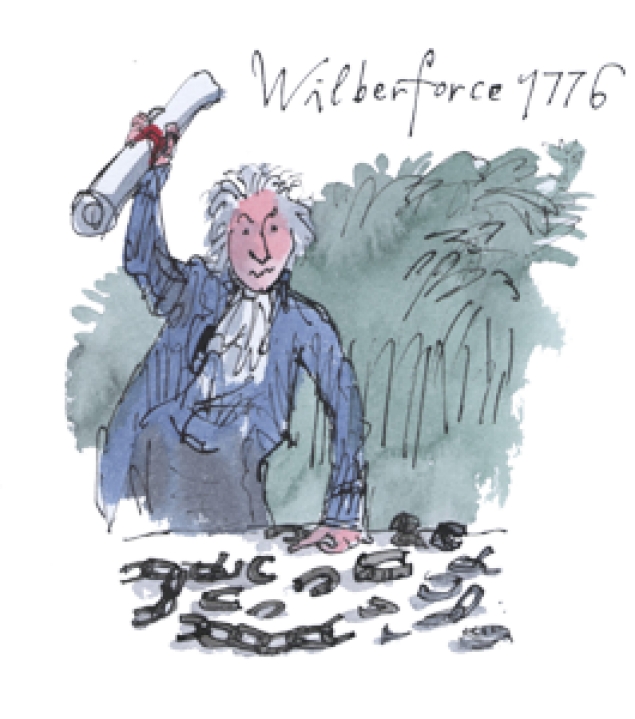 On 10 April, BBC TV's 'The One Show' featured Quentin Blake's mural in Addenbrooke's Hospital in Cambridge - another of his works for public spaces.

The 'Informal Panorama' was originally produced to celebrate the 800th anniversary of Cambridge University, of which Quentin is an alumnus. The full mural, which stretches for approx. 70ft, features notable people and events in the University's history: from 'Fleeing Scholars' in 1209 (who fled from Oxford to set up a new university in Cambridge), through Newton, Byron and Darwin, to the discovery of DNA in the 1950s. The final panel shows a host of graduates flying away on their bicycles, 'Transforming Tomorrow'.

The full mural has now found a permanent home in the corridors of Addenbrooke's Hospital in Cambridge where it continues to delight staff and patients alike.

Quentin explained to the The One Show's art hound, Phil Tuffnell, how he uses a light box while he is working.  Using some of the original roughs for the 'Informal Panorama' he showed how he uses the light box to see the shape of the rough drawing underneath watercolour paper, but explained that it is just as important that he can't see the drawing 'too clearly' as he doesn't want to trace it.  To do so would lose his trademark spontaneity.

Back in the studio, presenters and guests also tried out Quentin's light box method!