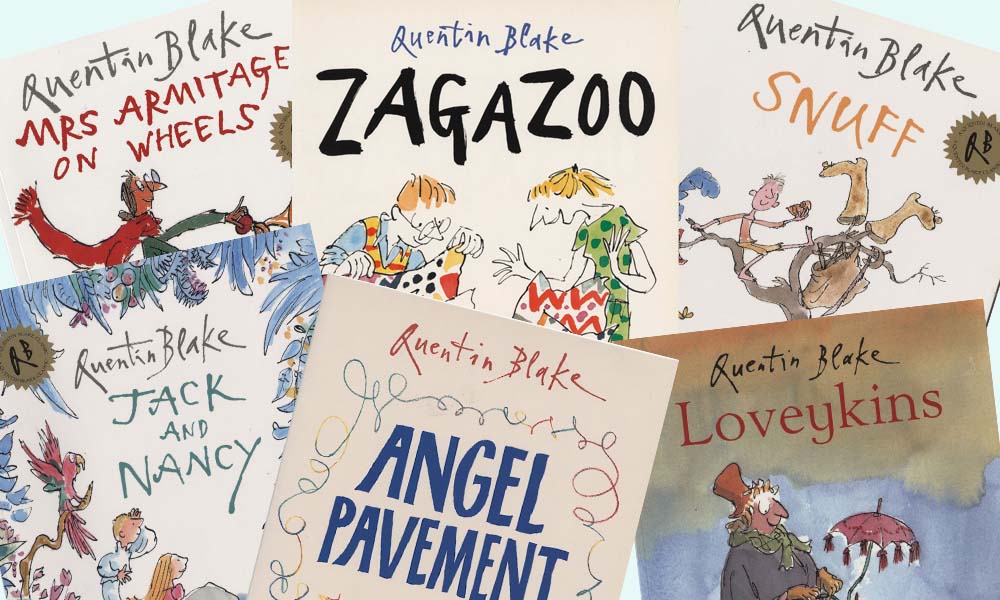 'Quentin Blake's Box of Treasures' coming to the BBC

'Quentin Blake’s Box of Treasures' has been commissioned by the BBC from Eagle Eye Drama, creating an animated box set of specials based on six of Quentin's best-selling books.  From Jack and Nancy and their exhilarating island adventure to Zagazoo's hilariously off-beat antics; Loveykins’ extraordinary transformation to the unstoppable inventiveness of the indomitable Mrs Armitage on Wheels; Snuff's attempts to become the perfect knight, and the magical murals of pavement artist Sid Bunkin in Angel Pavement, these beautifully-crafted and engaging stories will provide an exclusive treat for BBC and iPlayer viewers.
The BBC’s Head of Commissioning 7+ Sarah Muller gave the green light to the series, with each of the six 30-minute episodes to be produced by Eagle Eye Drama in co-production with Creative Conspiracy and in association with animation studios Spicy Acorn (Belgium), Tchack (France) and Kong (based in the UK).   The team at Eagle Eye have already brought Quentin's work to the screen in their popular animation 'Quentin Blake's Clown' which aired on Channel 4 during Christmas 2020.

Using traditional hand drawn animation techniques which succeeded so well with 'Clown', 'Quentin Blake’s Box of Treasures' will add to BBC’s long-established tradition of animated specials.   Eagle Eye Drama’s Executive Producer Tess Cuming said: “Sir Quentin Blake is one of the world’s most iconic and best-loved authors for readers of all ages and we are honoured to be working with him to bring this landmark box set of animations to life for BBC, and to be adding such a prestigious modern classic to our growing animation slate. Blake’s quirky, original and funny stories have been enjoyed by children and their families for decades and we’re delighted Eagle Eye along with our partners have this unique opportunity to bring them to the screen for the first-time capturing Blake’s iconic, inimitable style.”

Quentin commented: “I am tremendously pleased to be working with Eagle Eye, who I’ve successfully teamed up with before, along with the BBC, on what will be the first ever series based on my work. It will be most enjoyable to see characters from some of my books jumping off the pages and onto the television screen.”

'Quentin Blake’s Box of Treasures' is currently in development but will be distributed internationally by Aardman Animations. Broadcast dates for the UK are yet to be announced by the BBC.